The Ups of Downs of Fall

By SAI Engineering Incorporated - September 18, 2015
The coming of fall signals a new school year and with that the sad departure of the very fine interns SAI Engineering was fortunate to have this past summer -- Jacob Lasrado, a third year electrical engineering student at Virginia Tech, the recipient of an engineering scholarship from SAI while a senior at Woodbridge High School, and Bill Swift, a third year mechanical engineering student at Purdue University who attended Thomas Jefferson High School. Both fit right into the collaborative team culture that is SAI and were instrumental in assisting with several projects including designing systems to support well pumps to irrigate sports fields for Loudoun County schools. We wish them great success in the coming year. These young men join a cadre of dozens of interns that SAI has employed over the past two decades, some of whom became full-time employees, and nearly all of whom went on to gainful employment in the field of engineering. Last school year we partnered with the new Governor's School at  George Mason University to provide an intern experience to Tristen Gulley-Davenport who now attends UVa studying computer engineering with a minor in music. We look forward to following her journey to a fulfilling career.

We bid the interns farewell along with Dan Zito, longtime SAI Engineering Vice President and Chief Mechanical Engineer, with a fun pizza/beer bash capped off  by a DC performance of Capitol Steps. Dan retired after almost 20 years with SAI to enjoy the good life of watching sports, playing golf and spending time with his family in NY. 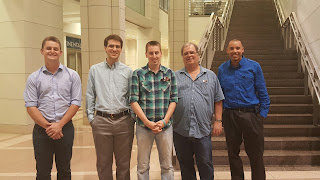 With Dan's retirement came the well-earned promotion of George Preston, PE, as Vice President and Chief Mechanical Engineer. George has been with SAI since his graduation from VaTech over 10 years ago and fittingly presented intern Jacob with his college scholarship several years ago at Woodbridge High School which George also attended. SAI Engineering is proud to have assisted in the establishment of the engineering program known as Project Lead the Way at Woodbridge, in existence for nearly a decade now. George and his wife Shana, also a Virginia Tech graduate who works in the accounting field, along with their young son make their home in a community conveniently located near the office. Congratulations George! 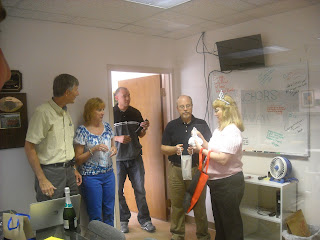 In addition to Dan retiring, long time office assistant, Susan Browning, also "semi-retired" to North Carolina with husband Bob and their dogs where they have built their long dreamed about home. In her stead, we welcomed Stephanie Saylor, who brought a wealth of experience working for other A/E firms, large and small across the country as a Coast Guard spouse. Stephanie and Chad have two school-age daughters and reside in nearby Occoquan. Stephanie has already become a very valuable member of the SAI Team.